Way back, in ancient times, someone decided it would be a great thing to show the movie version of the Wizard of Oz on network television.  It was so well received that it became an annual event.  I watched it for the first time that I remember when I was about three.  The music was great but it was the most terrifying thing I had ever seen. (Next to the abominable snowman in the annual Rudolph the Red-nosed Reindeer scare-fest and the stupid Great Pumpkin.  Oh yeah, and Oscar the Grouch.  I was a chicken, ok?) I'm sure the thinking was that Wizard was based on a children's book so it must be great for kids to watch.  Evil woman wants to steal the kid's dog, terrifying storm especially if you live in Tornado Alley, serious injury, smushed witch, the Lollipop Guild, WWotW, dark woods full of lions, tigers and bears, apple-throwing trees, flying monkeys, surrender Dorothy, poppies, weird gatekeeper, don't even get me started on the disembodied head surrounded by flames that made Sauron look like an acceptable neighbor, flammable scarecrow, o-e-o yo-ho, and melting, melting and then the kid gets left behind by the man behind the curtain but finds deliverance through footwear.  Time for the annual Yellow Brick Road of Terror.  By the time I learned to read, I wasn't going anywhere near an Oz book so it's likely I missed a reference or two.  I like the Kansas connection though.

The episode itself was cheesy fun and Dorothy was pretty cool.  I always like Charlie and while this wasn't my favorite episode with her, it was enjoyable entertainment.  I will tell you that I truly did not give a flying monkey about the plot after I saw the Crowning Garage of Awesome.

Credit where credit is due...

I like the black and white footage at the beginning.

bowtrunckle has a really great write-up about the film noir styling used in that section.

I wonder if the boys copied the key yet?  Zeke is going to lock Dean out. 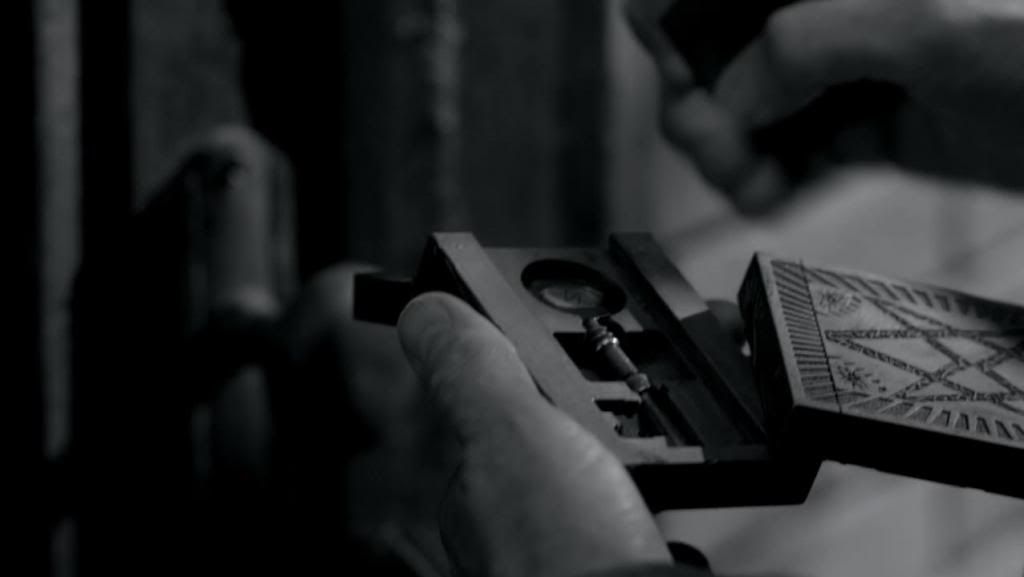 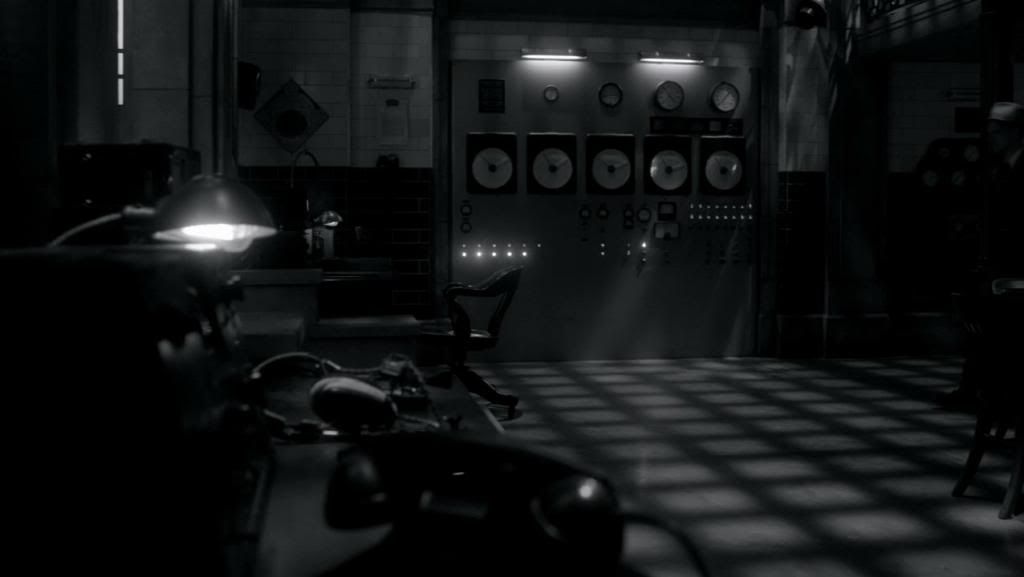 I bet those ties are amazing in color. 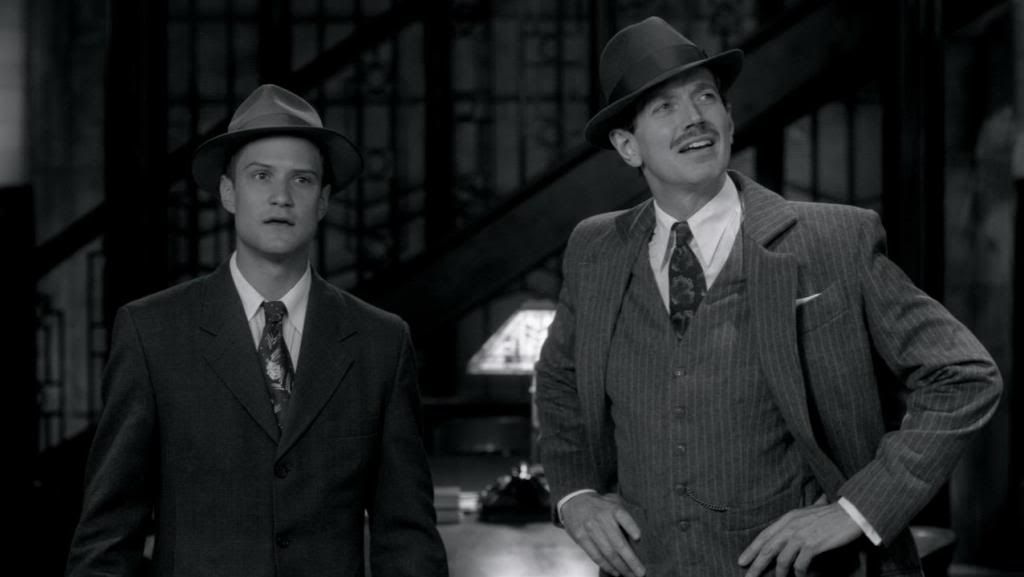 I'm coveting so much in the bunker.  Coat envy.

Hat envy.  There's a lot less written on the chalkboard than in the current time.

Then they did this cool transition where the color started to come in and the picture faded to the current time.  Seems like the Oz movie started in monotone and shifted to full color when Dorothy got to Oz.

Dorothy stays in the picture so she merges with the current time and in a sense that's true since she's trapped in the bunker.

I like this transition too from the black and white outside of the room... 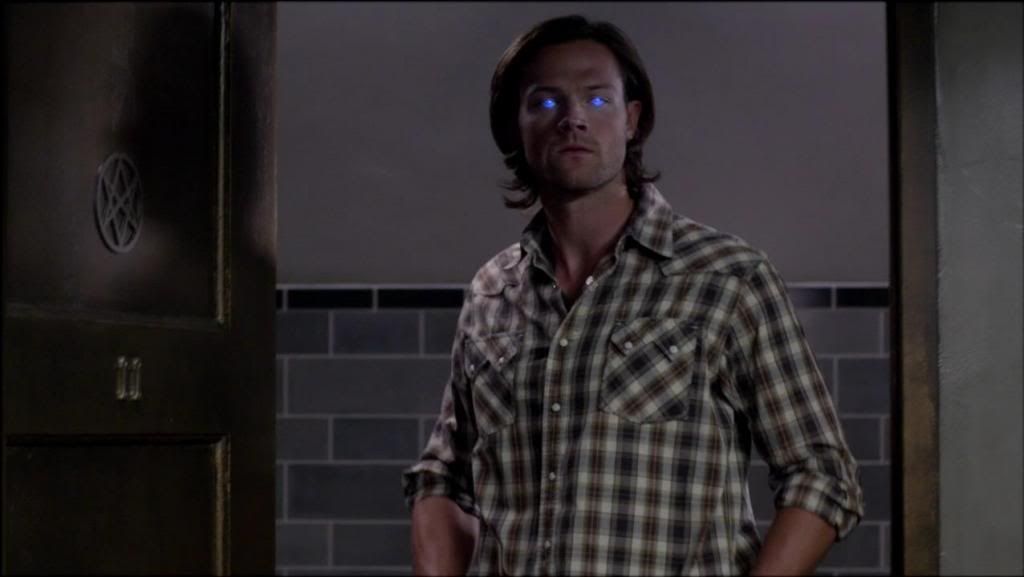 Zeke is also the name of the farm hand in the movie who shows up in Oz as the Cowardly Lion.  Robert Singer got some other good shots.  Shoulder envy.

Probably can't be used as a shiv.

This was a cool handoff. 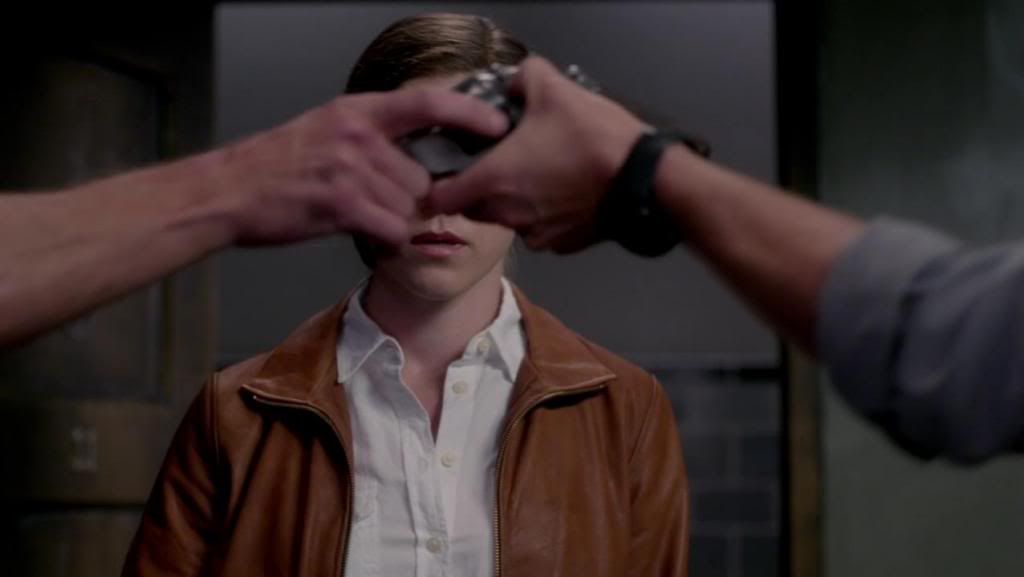 While we're on that topic…double ouch.

I thought it was neat that the contents of the bottle formed a webbing that was shades of gray like our view of the occupants before they ended up in the bottle. 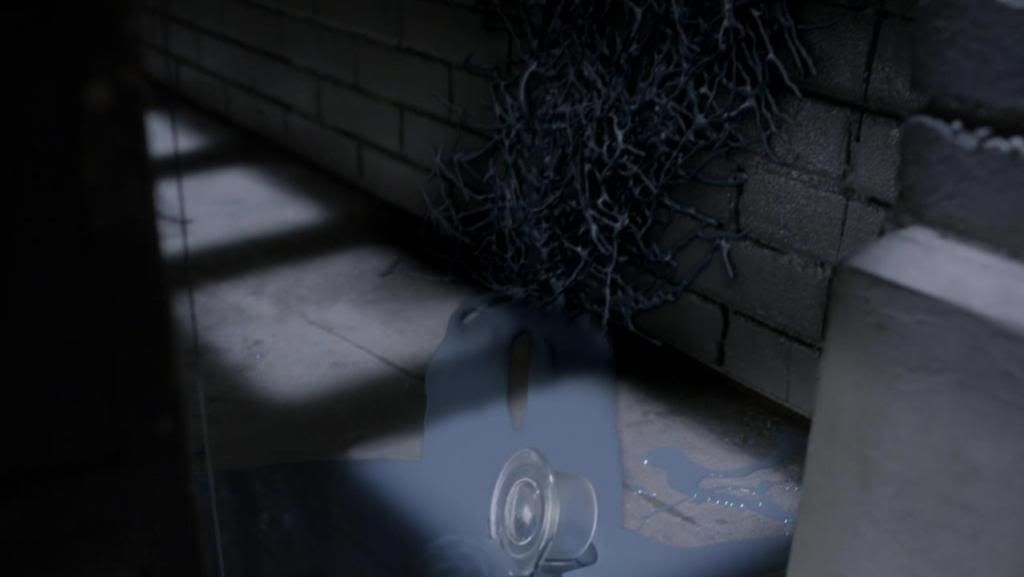 If you're in a warded building and you discover a web that grew in a couple of hours, are you going to walk right up to it and start cutting it open?  No.  Dean, how are you still alive?  Shelob might be in that for all you know.  At least stand at arms length and poke it with a broom first.

This episode was brought to you by Microsoft and the most amazing group of facial expressions, mostly from Dean.

Sam's right in there though.

This gent had this smirky smile the whole time he was on screen.

There was a lot of annoyed eye rolling.

Sam looked good though.  He smiled a lot which must be the build-up to a big Zeke-shaped crash.

At first I thought the back and forth about reading books was just a throw away moment but after thinking about it, I think it went along with the theme of books and storytelling.  How does reality mesh with the source material?  The books and the written word also tie in nicely with Sam and his connection with the bunker as a library and storehouse of knowledge, rather than a home.  It also means that given the right key, Westeros is through a bunker closet door.

Such a rotten liar.

The 'Sam better figure this out soon, because the lying is killing me' face.

We've seen way too much of this face in the early part of the season.

And this one, the 'what the hell happened'. 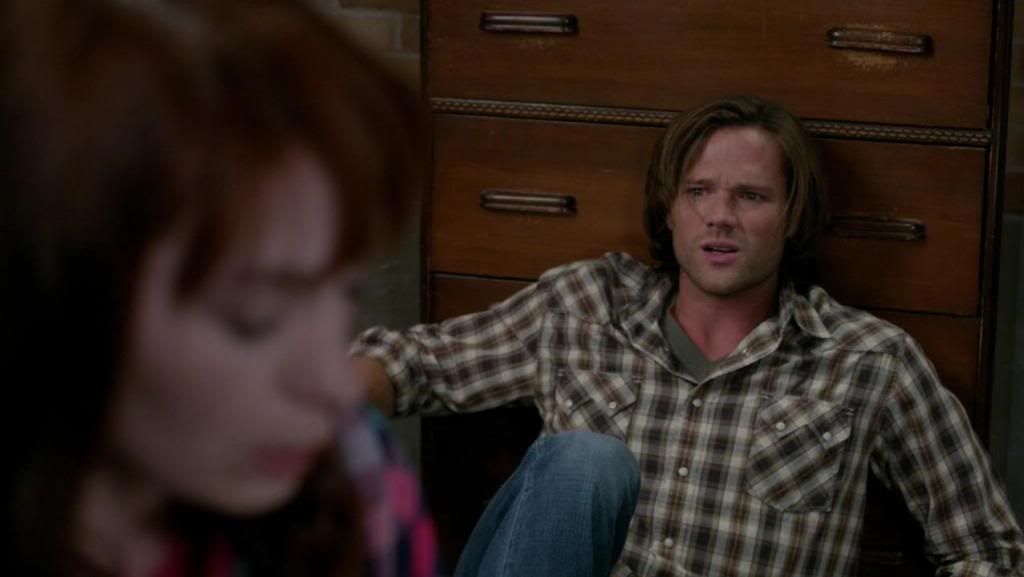 Never too much of this.

The WWotW doesn't appreciate snarky Crowley nearly as much as I do. 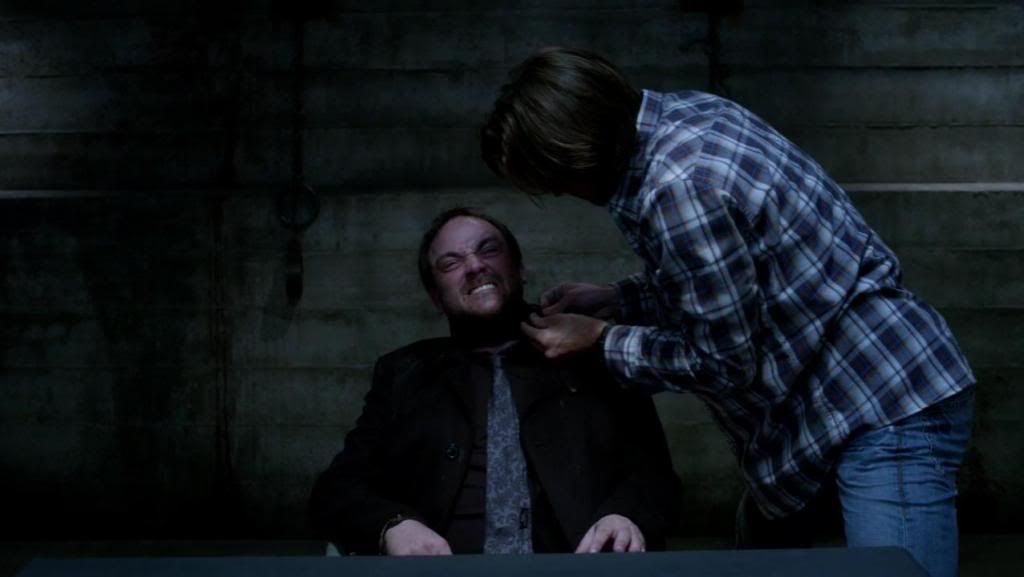 Yeah, I don't know either.

And then we have the late, lamented Jenkins who must have been an intern.  He's pretty close to the beginning of all the green that shows up related to Oz.  The movie also used a lot of green with the Emerald City and the green WWotW.  It's like the posters for the musical Wicked.

It's subtle but the smoke is green.

The green lingers but once the witch gets the key, pretty much everything that focuses on her directly is red.

It's only fitting that the weapon of choice is red.

Make sure your witch killing shoes have that sturdy non-slip sole.

The green is there when Dorothy opens the door to Oz.  I love the fact that the cover has the wacky hyphenation.  It's like not planning out a poster board for a school project and running
out
of
room.

Charlie heads off in her green military jacket.

One of the best parts of the episode was getting to see more of the bunker.  We finally found out that Sam has his own room.  It's decor is straight out of the Early Bobby period.  It's telling that Sam's room is full of writing and Dean's is full of weapons.

More lamp envy plus a vintage phone.  I wonder if the bunker is on a party line too?

Nice contrast with comments about how uncomfortable Sam's bed is especially compared to Dean's memory foam.

Looks like Dean has been stealing art from motel rooms to make his room feel more homey.  He should have taken the starburst clock.

We got to see the kitchen.  No envy.  It's seen cleaner days.  Imagine the sandwich that was left in that fridge in 1958 though.  It probably evolved into sentient mold.

We also got a look at what makes that map table light up.  It's wired to something.

A computer.  About that….we'll let Sam be emphatic for a minute.

This is about as smart as slicing open a huge invasive web while standing in front of it.  Do not try this at home.

We're told that this computer runs an early warning system and can lock down the bunker.  Here's a brief look at what we're handwaving.  The last time anyone was working on a computer system in the bunker was prior to Grandpa Henry's jump in time.  He left in 1958.  Up to about 1958, computers used vacuum tubes as the computer processor.  Vacuum tubes are similar to incandescent lightbulbs which burn out regularly so there should have been an easy access door somewhere.  They also generate a tremendous amount of heat so early computers required massive air conditioning to continue to function.

Most of the early computers were used for calculations, often with some kind of military operation in mind.  The ENIAC, a very early computer, was used to calculate artillery firing tables.  It sounds like the MoL computing system warned about supernatural events.  The closest thing I could compare it to would be NORAD which monitors air space for an air defense network.  NORAD did have a computer that they began testing in the mid-1950s and were putting in place around 1958.  It was finished (and obsolete) in about 1963.  The computer system weighed 250 tons, used a total of 60,000 vacuum tubes and up to 3 megawatts of electricity, and cost $10 billion in 1954 dollars.  This is a picture of a portion of it.  You can't see it really well, but the console was constructed to include a cigarette lighter and an ashtray.

I'm going to figure that kind of like a creation story, the computer upgrade done by Charlie is really an allegory of some sort.  And on the first day, wire X was plugged into box Y and there was transfer of data.

Either that or Microsoft is the equivalent of pixie dust.  It probably would have been easier to write the programming from scratch for the current technology.   There's probably an app for it.

Fun to see the Moondoor map.

Charlie has a link to the Supernatural books.

I guess this bugged me mostly because I can only suspend so much disbelief about my already suspended disbelief.  This whole fix was just a bit too easy.  Unless it turns out to be possessed.  Open the bunker door, HAL.  I'm sorry, I can't do that, Dean.  (I told you to copy that key.)

Then there was this.  All I can say is that the WWotW ought to look into doing voiceovers for monster truck show commercials….FRIDAY, FRIDAY, FRIDAY.  I want to see the gag reel for this so much, my pretty.  Where is the bucket of water when you'd really like it?

Well, from the ridiculous to the sublime.  The Garage.  I liked its grand entrance.

Cars, swoon.  The green one looks like a 1956 Ford Thunderbird.  The white hardtop might come off to make a convertible out of it.  I think the black one on this end is a Ford about 1934.  Think Bonnie and Clyde.  I don't know what the red one is besides drool-worthy.  So the cars are amazing.  I'm pretty sure whatever is powering the bunker is the same entity that backed those cars into those bays without taking out a pillar.

The boys' home has a home.

I love the wood around the garage doors.

How did they get the Impala down this?  Did Dean back her all the way down this tunnel?  Pay no attention to the man behind the curtain.

Still, it was all glorious anyhow.

Just a few last bits before we say goodbye.  I liked that we got to see some of the MoL actual files.

I also liked that in an episode about words and keepers and writers of words, that Dorothy was keeping her own hunter's journal.

Then it was time to say goodbye.  I think I'm going to miss you most of all.

Charlie heads off into a bright magical future.

The guys say goodbye to another friend.

I know part of this episode was all about the bunker being home for both Sam and Dean and Sam not having had good luck with homes.  Maybe in other circumstances, I could enjoy this scene but the Zeke part of the story is really emotionally doing a job on me.  I'll just leave it with a nice Sam smile.

Thanks, SPN, for producing an episode that my ten-year-old could watch, and has, over and over.  Sure, sweetie, you can watch….just don't start talking like Dean or Sam…or Charlie…and for sure not like Crowley.  It's been fun to listen to someone else try to fill in plot gaps.  If Dorothy died in Oz, how did she come back?  I don't know kiddo but I'm sure you'll come up with something.  After explaining as much of the overall storyline to my kid as I could, she's decided that basically the boys create a calamity (her word) and spend the season solving it only to create another calamity for next season.  Yup, pretty much SPN in a nutshell.

screencapped.
Tags: 9.04, cap and recap were sitting on a fence, caps, spn
Subscribe