everything from ore freighters on the Great Lakes, trans-Atlantic ocean liners, and pirate ships to 16th century galleons and spaceships like the Space Shuttle.  My favorite ships are clipper ships and ships-of-the-line from the early 1800s.  I got to fandom partly by way of the adventures of Jack Aubrey, a british naval officer written about by Patrick O'Brian so it took a while to get used to ship meaning something other than big boat.  There are relation"ships" in the Aubreyad though so it was an introduction to a different use of the word.  SPN does very little with water besides bless it and throw it on demons and actual boats are few and far between.  Most of the SPN ships are the relationship kind, usually with some romance or sex thrown in the mix.  Erotic, psychotic codependence works too.  In this fandom, I can't even say that these are the people kind of ships because we've got your ships that include angels, demons, reapers, Death and a car, amongst a myriad of other things.

Here are my favorite SPN ships.  A couple of them are canon ships. (Not to be confused with ship's cannon. That's that other fandom.)

John/Mary, especially when we get to see them early on.

Sam/Jess, mostly due to fanfics that have given Jess a full story of her own.  This is the SPN ship version of the Lusitania.

Bobby/Ellen, canon in some alternate universe and doomed like the Titanic.

Bobby/the Sheriff, if they had only had more time. 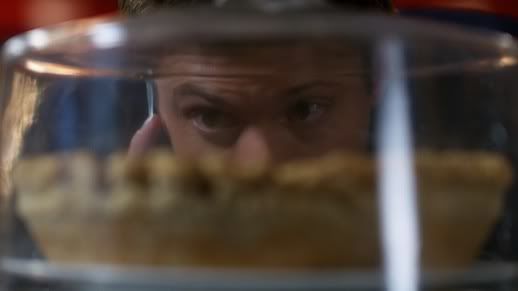 Dean's relationship with Death, big D or little d, while maybe not a romantic relationship, has gotten a lot of exploration through the seasons.  When they personified Death, it gave the show a chance to get some of what might be going on in Dean's head out where we can see it through body language and dialog.  Dean's gotten pretty close to Death.

With Tessa, Dean's flirted with death and felt the kiss of death.  While not a canon ship, I think these two have got something going on.

The thing about shipping characters is that in the hands of a good fan fiction writer, almost anything becomes believable.  In the case of Dean, some of the ships people write about are unhealthy and even dangerous but somehow easy to picture anyhow.  I think part of that is because Jensen as Dean manages to have chemistry with a whole range of characters, from Anna the angel to Alastair the demon.  I don't think it's coincidence that the two non-canon ships most associated with SPN include Dean.  As far as shipping goes, people are going to see different things.  What seems incomprehensible to one is the OTP of the next person.  That happens to me with Dean/Cas.  I can see how people see it but I can't wrap my head around it.  Doesn't mean it isn't there, it's just not there for me.  If it's canon, great, if not, I wish people would enjoy it in fanfiction and on tumblr but let the writers tell or botch the story as they will.  Which brings me to my favorite ship, Sam/Dean.

If sex has to be included for a relationship to be considered a ship the way fandom uses the term, then this ship isn't canon and will only ever flourish as Wincest in fandom.  I'm really happy to have it stay there.  And yeah, after a discussion over on

ash48's journal, I should probably clarify that to me Wincest includes sex.  If you were a curious young adult reading romance and horror fiction in the mid-80s, chances are you ran into author V. C. Andrews.  If you did, reading about sibling incest is probably old hat.  Flowers in the Attic with its story about siblings falling in love while locked in an attic was printed as a hardcover book granting it a place on library shelves not always given to romances or horror stories only printed as paperbacks.  It was pretty easy to come by as it sold 40 million copies.

If you go with a ship being characters who love each other beyond reason and that love drives a lot of the plot and action in the story, I think that's pretty much canon the way Sam and Dean are written.  Granted, that's my take on it and not everyone's.  For me, it's very much a love story even without any kind of sexual relationship and for me that's a big piece of why it's so compelling.  If it wasn't for how tangled up in each other the Winchester boys are, this show would have lost my interest fairly quickly.  I'm amused at how this show has turned me into a Victorian lady getting the vapors every time either of these guys takes off an outer layer of clothing.  Watching most shows where there is some kind of romance, I'd be waiting for some steamy scenes.  With this show, I wait for hugs and can list them all.  It's SPN's version of reunion sex.

While I see a love story playing out between Sam and Dean, it's not a love story like a Harlequin romance.  There's really nothing romantic about it.  It's dark and more tragic than not.  It's the kind of love story set on a foggy moor, in a Paris opera house, or behind a barricade.  We keep expecting a crazy wife locked in the attic, tuberculosis, or a cyclops and 108 suitors.  It will bring down a kingdom, start a war, look back over the shoulder too early or jump in front of a train.  It's been possessive, jealous, betrayed, and constant despite everything including PTSD, trips to Hell, addiction, and relationships with other people (angels, demons, yoga instructors, vets, vampires).  We've been watching it since Dean broke into Sam's apartment, ignoring daytime hours and knocking on the door, all to get Sam's attention, wrestle, and be obnoxious to Sam's girlfriend, because he didn't want to try to find John by himself.

It hasn't really allowed anyone to get between them for any length of time.  People who get between these two end up dead or at the very least, with their memories wiped.

Eight seasons later, it's as tangled as it ever was.

It will be interesting to see where humanized Cas falls in all of this.  I know some Dean/Cas fans have been really vocal about wanting to see that become canon.   I just don't see how that ends well for anyone.  With this show, happily ever after isn't really the point though, so who knows.  That's what fan fiction is for.  Thanks to all you authors, vidders, and artists out there.