I had a lot of fun just watching this episode.  I feel like it has been so long since I've just been able to watch without a lot of meta-angsting over the season.  It was great to see an episode where I wasn't worrying about the boys throwing punches at each other.  I've missed this less antagonistic Dean.  And I just like Charlie for her own self.  I liked where they went with the plot.  I don't LARP so I couldn't say for sure but it seemed like they were having fun with fans who do this, not making fun of them.  It was also a great way to put Sam and Dean in a quasi-medieval setting with a small budget and not have to worry about historical accuracy.  I love how they pointed out that Sam and Dean do LARPing all time with their fake badges.  They actually got caught out for once and because of where they were, it was taken as part of the game so it didn't matter.

The episode was written by Robbie Thompson.  So far, I've really enjoyed his episodes.  He wrote Time After Time, Slash Fiction, The Girl with the Dungeons and Dragons Tattoo, and Bitten.  I wasn't crazy about Bitten but still thought the writing was good for what they were trying to do.  I feel like I recognize Sam and Dean when he writes them.  His episodes have good pacing and some humor to lighten them up but still there is usually something meaningful that happens beween the boys.

Jeannot Szwarc directed this one.  He also directed Adventures in Babysitting and Mannequin 3.  In comments in somebody else's journal, I compared the scary skull-headed thing to the creepiness of the mannequins and bio dummy without realizing they were both done by Mr. Szwarc.  Those monsters, along with the scarecrow, are some of the scariest monsters on the show for me.

The episode was set in Farmington Hills, Michigan, where my father-in-law is buried.  It's basically part of the urban sprawl outside Detroit.  If this is January, the weather is all wrong so I'm not even going to worry about when it is.  While Farmington Hills isn't known for LARPing, there is a huge Renaissance fair held not too far of a drive away in Holly every fall.

I liked how the episode started off with a close up of knight and monster action figures.  It lets you know pretty quickly something about the subject of the episode.

The first victim walks in and the camera starts to pull back and there is Aragorn's hand and sword on the Lord of the Rings poster.  The victim is wearing a shirt that's been worn before but I can't remember where.

Then he and all the other victims on this show proceed to reenact every Sean Bean movie ever filmed.  Except the one with the boat hook.  And the satellite dish one.  And the Lady Chatterley.....oh right, he lives in that one.....mmmmm, Mellors.....

Where were we?  Oh yeah, drawing and quartering and then we meet the Oakland County Sheriff who is a real hoot.  That's quite the collection of stuff complete with a Viking's head at the victim's house.

The crime scene is the beginning of the red, which pretty much covers everything for the rest of the episode.

After some more investigation, another death, and 16 bottles of hand sanitizer for the sheriff, Sam and Dean see the picture of Charlie and go to check it out.  While they are there, you can see Jared and Jensen trying not to break character and start to laugh.  These guys really don't go for personal space any more than Cas does.


ETA: The guys might be supposed to be laughing here.  It just looks like they're losing it from the cap.

Then they gave a great nod to Eowyn in the Lord of the Rings.  I'm sure there are gifs of both all over the place.

She tells her opponent to go get his limbs reattached.  (It's only a flesh wound.)  Then off to the Queen's tent for a freakout.  The average wingspan of the Greater North American Samuel Winchester (Phoebastria winchesteri) is approximately...

Pretty posh for a tent in a park. The red army on the map looks besieged even if the green or the blue is on its side.

Both Jared and Jensen are pretty good sports about so many things.

They got the portrait to look a lot like Charlie.

We get to see a map that could be from any fantasy book or game starting with Tolkien's Middle Earth.  Gondor, Eriador, Mordor, Moondoor, Bay of Gondoor, Mount Mordorg, the Dark Plains of Wanek-dor and the Desolate Hills of Neumandoor.   George Neuman has been the SPN set decorator since 1.02.  Jerry Wanek is the production director.

Sam goes off to research by falling through a wormhole.

Dean has to put on LARP gear and I think it's another homage to Lord of the Rings.  In The Two Towers, Aragorn puts on his armor before battle and it's filmed about the same way.  His Grubbiness, Lord Aragorn is second.

I like how they shot this so you can see both the back and front of Dean's outfit as well as the cheeky queen.

The best part are the boots.  Charlie played Car Wars.  I haven't thought about that since my younger brothers played that after school a billion years ago.

Dean thinks this is all pretty cool.  It only when Dean isn't standing next to Sam that you realize that he's pretty tall too.

I really liked this guy with his fake ears and teeth.  Ironic reference to the Geneva Convention in light of 8.10.

Still lots of greenery around, whatever season it is.

Then Charlie has her run in with DeerSkull.  There's something about a creature that's vaguely humanoid and extremely still that scares the heck out of me every time.  Maybe it's because I just instinctively know something isn't right.  Might be that I expect to be startled.  My kid pointed out that this is a bit like the Witch King Ringwraith from Lord of the Rings also.

Cool shot looking down at Charlie.

Charlie gets taken to some tent with a lovely period-accurate lamp from Pier One.

Yup, still scary.  Maybe it's that I know it's animate but it's too still.

I just feel bad for Sam and hope the year gets better for him.  It's SPN though so...yeah, I thought I wasn't angsting either this episode.

Then Dean takes a gun to a sword fight and walks away with Shadow Orc ears.

On to the tent.  Now that Sam has had a run in with a fairy, does that mean he'll be able to see them too?  Even though there aren't any windows in the tent, somehow the painting acts as one.  Gilda, Glinda, Gholandria, Glorfindel...Glory, Hallelujah.

Much bigger on the inside.

Guns of war into dove feathers of peace? 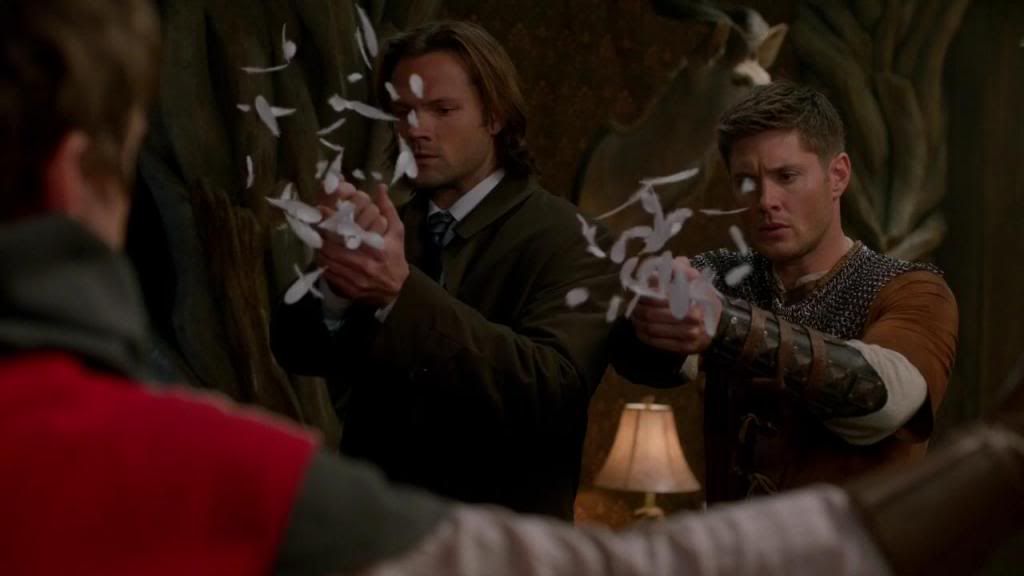 Sam always gets the job of trying to convince people that it's much better to live in the real world.  I thought we left the anvil back a few episodes.

He tends to get the same response....it must be Wednesday.

Sometimes it doesn't even pay to take a sword to a sword fight.

How about fists at a sword fight?  For most of the time that they are confronting Baltor the eBay Shopper, they are standing in front of the mounted head of what I think is an impala.  If it isn't, it's at least related.

Dean said he understood that fun wasn't going to make it better for Sam because I think he actually has done this too.  It was hard for Dean to leave Lisa and Ben, although for somewhat different reasons.  I'm glad Sam was the one to say that they should stay.  Both these guys have had it rough and I don't want one of them to be stuck as the "no" guy all the time.

Then we get Dean with a necklace of Shadow Orc ears giving a motivational speech.  There are a lot of movie speeches they could have used for this part but I think it's telling that they chose this one about giving up your shot at long life for a chance at freedom.  That sums up a lot of this season so far and SPN in general.

I'm glad they let Sam get dressed up too.

Plus, the entire fandom has been waiting for this.

They've got the red and green on the same side.

And the whole procedure gets interrupted by a sky blue frisbee.

Then we got as close to the Butch Cassidy and the Sundance Kid ending as I ever want.

I hope that this episode helps set the tone for what's to come for the rest of the season. Bring it.

grande_caps, various google searches for Mellors and impalas, and me.

Tags: 8.11, cap and recap were sitting on a fence, lotr, spn
Subscribe