I wanted to post this before 8.10 airs tonight.  Is it possible to hate an episode and still love lots of things about it?  Guess so.  I spent most of hiatus getting over this episode and don't want to go back to the emotional spot I was in after I saw it so I'm going to stick with what I liked about it and surprisingly enough, there was still plenty.

The episode was written by Daniel Loflin in his first solo effort.  He usually writes with Andrew Dabb.  If they are writing on their own now, does that mean we get twice as many episodes by these guys in a season?  Break out the chocolate and mac n' cheese comfort food.

The really bright spot in this episode for me was that it was beautifully filmed.  The episode was directed by Nick Copus, another first-time director to SPN.  He's not new to TV direction though.  He started in 1997 and has had pretty steady work since then with shows like Alphas, Nikita and Arrow.  I'd be happy to see him back on SPN.  He incorporated shots taken from really interesting angles that worked pretty seamlessly into the overall filming.  The lighting looked great and there were a couple of items in the set dressing that are starting to look familiar.  As far as color goes, there was less of the sky blue and more of a lot of green.  That could be because Cas and Kevin weren't in this one.

The episode was set in Carencro, Louisiana, which turns out to be Benny's hometown.  It's located due west of Baton Rouge, about 3 hours south of Clayton, Louisiana, where Benny was buried.  It's not too far off the Gulf.  The town name comes from "carrion crow" or vulture.  The region was predominately settled by Acadian refugees in the mid-1700s.  In case you're interested, the region has it's own style of folk music and here's one of the better known Cajun bands, BeauSoleil, playing Vieux Crowley.  How could you resist a title like that?

Anyway, music appreciation is over except to say kudos to SPN for using a song by Steve Earle during the scene when Elizabeth calls Dean.

So back to the look of the episode.  It started off with a visit to Guidry's.  The colors in the sign are familiar and the alligator looks dapper and happy, if a bit toothy.

One of the kinds of shots that Nick used in many ways were long shots through doorways or vantage points that make the viewer conscious of the fact that we're observing rather than being part of the action.  It also gives the feeling that someone else is watching or spying.  Appropriate since we have both Martin and Sam doing that.  The shots start at the cafe.  Already we're getting greens.

The view moves toward the cafe and we can see that Benny is behind the counter.  He's got a lot of red and yellow.  Those aren't really great colors in combination.

Finally Benny turns around and we see the scariest things in the whole episode, the creepy chocolate kiss and evil cat bucket.  Benny's wearing green too.  I like Benny and the fact that he looks like a real person, not a Hollywood vampire.

Elizabeth doesn't fair well on this show.  In a past SPN life, her kid was the creepiest of all the changeling children in The Kids Are All Right.  Here, she's wearing pink, usually not good.

She's by a no smoking sign that has been around a lot in motel rooms this season.

We get some interesting angled shots of Martin.  From behind the coffee pot.

And under something with red, white, blue and stars.

Then we see the outside of the cafe with an amazing wind chime made out of old bottles.

You can still see some of the green bottles by Martin in his green shirt.

From there, we jump to Sam and Dean where the filming starts with another long view from an odd angle.  Green, red, and yellow.

Then a bit of blue but not much compared to the red and yellow.  There's some more of the black and white checked pattern in the window and on the sidewalk.

We get a couple of shots of the boys from outside the car.

I like shots where you can see faces in the mirror.  Kind of goes along with the idea of being watched.  This one was taken from outside the car too.

Then we get a couple of shots to give us a sense of place.  Ominous sky.

DEAN "I guess we'll cross that bridge when we come to it, won't we?"

Off to go find Martin, who's still a few bricks shy of a load.  More red and yellow.  There's another sign for something advertised with the US highway sign marker shape.  One of the beer signs at the cafe uses the same shape.  I love the sign below it with the wheel and the Spirit of Ecstasy, the Rolls Royce emblem.  We're supposed to "kiss the cook" and visit the dentist too.

Martin is staying at the Beaudelaire, which is a dump but still puts seascape art in the hallways.  The boys are in blue and green.

Martin gets green and red.

I like how they end up with Sam in the darkness with his back against the wall.  Sounds about right.

Since we're here and I don't really care all that much about the plot, here are the rest of the interesting shots from Martin's room.  I don't remember much about Martin from last time but now he appears to have a very short fuse and whiskey.  Always a good combo mixed with whatever the psychiatrist has him on.

So they handcuffed Dean to a radiator but they left a pile of junk and an electrical cord within reach.  This is the guy who can get out of cuffs with a paperclip.  Evidently they removed his jacket.

Yeah, this is working out well.

Here's my favorite shot for the episode.  I love reflections in the Impala paint.

What should we look at next?  How about Sam's first flashback.  They still have that overexposed, hazy look but the sun isn't shining and the house is surrounded by trees and flowers.  Some of the shots of Sam and Amelia are taken from within the vegetation going back to the idea of being a voyeur.  Somebody watched Sam leave Amelia's.  Maybe there's more than just us watching now.

Pots of precariously perched flowers, weights and a cooler.

Darling you gotta let me know, should I stay or should I go?

Amelia has a darker red on now.  The only thing keeping this from being an awful over-budget blockbuster is that Sam and Don didn't start out as best friends.

What's on the other side of that fence?  A greenhouse?

Enough of this, let's go catch up with Dean.  It's another long shot of that door but this time from inside.  A couple of things strike me about this.  If the cops eat here, the food is probably good.  There's another cross on the wall.  They are showing up randomly in a lot of episodes.

I like this shot of Elizabeth from behind Dean.  She's wearing pink AND flowers.  Oh honey, you were on this show before.  You know how this goes.  The red and yellow paint markings on the wall over Dean's left shoulder are really interesting.

A view from the pie.

Let's go find Benny.  We catch up with him with another nice overhead shot. 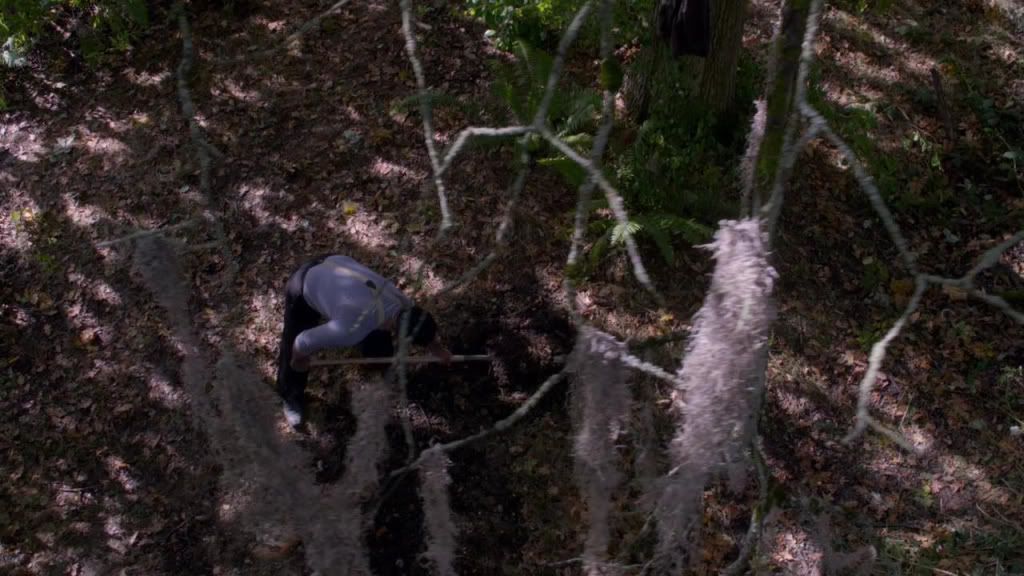 I really like these shots looking up through the water.  This one even has a bit of a rainbow.

Then Benny washes his hands and the blood disperses into the water.  I guess it would be dead person's blood at this point.

Another shot through the trees.

Benny's armed with a machete too, as though he's only worried about a vamp, not something he could repel with a gun.

Sam and Amelia have a red cooler on their porch.  Benny has a green one.  Hmmmmm.

More leaves in the way.

Dean and Benny go off to take care of the rogue vamp.  Another distance shot.

This picture really needs a caption.  Something with the word "egads" in it.

So is Dean the bait in the trap?  Lobster traps all over the place.  There's that no smoking sign again.

Barrels of imminent danger and the buoy line you shouldn't swim beyond.

We get a couple of shots from beyond a wire fence.

Back to the cafe for another long view through the door.  I like how the yellow sign on the door looks a bit like police line tape.

No pink now but I don't think it will help.

Bloody pie as a death omen.

Benny comes back for Elizabeth and passes all these green bottles.

Interesting placement of Elizabeth in the shot.

There have been a bunch of shots of cars on the road.  Benny.

I like this sequence with Dean arriving back at Guidry's.  More long shots through the doorway.  Reflections in the water.

Dean, smack in front of that cross, not knowing what he's going to find.

We don't know either.  Is it Benny or Martin?

Martin, with the red and yellow label on the bottle.  Nobody wins this one.

Might as well catch up with Sam as he blinks in and out of reality.  Still a flashback and we finally meet Don.  NASCAR track on the big screen.  That's been showing up since Southern Comfort.  Don gets to wear green plaid now.  Other than their faces, this is pretty dark compared to where Sam's flashbacks started out.

Sam decides to leave.  Another shot through a door into a lit room with green and flowers and a bed which we guess Sam won't be sleeping with Amelia in any more.

Sam's probably just been waiting for Amelia to end up in danger.  Possibly facing what he's been dreading, Sam looks through the window and gets put in the place of the outside viewer where the camera has been putting us throughout the whole episode.  Now Don gets red plaid, fairly similar to the Red Plaid Shirt of Angst.  Sam is reflected back indistinctly.

A last view of Don and Amelia, with a very distinct reflection of Sam and darker in the room.

So back to the bar.

Drawing back, we get to see all the stuff on the wall behind the bar.  Everything is there.  Red and yellow.  The Steak Feed sign from the store in Southern Comfort and the NASCAR poster from the bar in that same episode.  Texas flags with red, white, blue and one star.  Alcohol.

Yeah, that doesn't look good.  It's so very dark.  Sam's face is half in complete shadow like when he looked through the window.

And here's Amelia, bringing back a little light.  Or a halo.  And pink.  Girl, you should have stayed gone.

Then she moves and looks a lot like the beer ad on the wall from Party On, Garth.

Tags: 8.09, cap and recap were sitting on a fence, spn
Subscribe