So I had fun with this one, what with Fred Savage being a Leviathan and Dean, the Eggman. I'm ok with having the occasional episode where I don't need to watch it peeking from behind my hands. It's not to say that there weren't some creepy parts to this. Fear of clowns is pretty common. In looking around for info about coulrophobia, I found mentions of a study done that showed clowns were the third most feared thing in the UK behind spiders and needles. While I'm not frightened of clowns in general, there are some specific ones that can be nightmare inducing. So it appears that Sam has a lot of company.

This week's episode was directed by Mike Rohl who also directed On the Head of a Pin and Folsom Prison Blues, among others. I liked some of the choices he made in filming. This episode didn't have much in the way of flowers marking potential victims or peril but there was a lot going on with color and images of faces. There was also a lot of glitter.

At the beginning, it started with Sam running and I immediately thought of Sam running through his head after Cas brought the hell wall down. As we got to his fight in the warehouse with the clowns, I wondered if this was Lucifer related. Turned out, not so much. Right away we get introduced to things causing fear which are bright rainbow colors with a focus on red, yellow, and green. Even the title card gets splattered with them. Blue shows up pretty often also but more in a background kind of way.

We never even see the shark. More glittery aftermath...

SPN uses red and yellow to indicate danger and Plucky's has "warning" written all over it. It's as bad as a Biggerson's.

Green isn't a very friendly color on SPN either and it's combined with red a lot for danger or warning also. Here is Sam hemmed in by it when he finds out he's going to have to spend time at Plucky's. For a big guy, he looks diminished by the camera angle and the heavy, dark rock, taller lights and the crazy pattern bedspreads.

Home of the Wichita Stingers.

There's a lot of green in what the kids have drawn here.

Which brings us to facing what you're afraid of. Poor Sam, with everything else he has to deal with, now there are clowns and Plucky's. What he fears greets him as he walks in the door.

It's pretty obvious that Sam is tall enough. (My favorite cap from this ep.)

But it doesn't really matter how big you are. Your fears somehow always seem bigger.

And Sam's right back to where he was as a kid. Clowns are scary, particularly these next couple. They have glowing red eyes as well as nasty teeth. Clowns must have odontophobia.

I can't imagine the breath on these guys. The clown fight was choreographed to include some typical clown moves: juggling, tossing a person back and forth like a ball, and the ever-popular spray from a button flower.

It wasn't a pratfall fight like in Bad Day at Black Rock, though. It was serious fighting. Unfortuately for Sam, these clowns don't bleed after all. They do lose pieces.

One of the reasons given for why people think clowns are scary are the outsized features they typically come with, particularly on their faces. There were a lot of camera shots on odd looking faces in this episode. There are the clowns that we've seen above. In the cap below, there are a lot of faces looking like masks or skulls with only holes for eyes. Maybe because the basement is where death is handed out.

I wonder if this is Seattle or Toronto? Tyler reminded me a bit of Ron in Nightshifter. My youngest brother looked a lot like this as a kid with the bright red hair. He's four years younger than me and that puts a lot of Dean and Sam's older/younger sibling stuff in perspective. 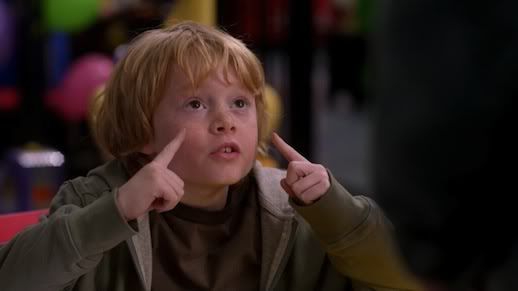 There was a lot going on with the awesome motel room, including hula dancer wallpaper. What caught my eye were the faces placed around the room.

Several on the counter by Dean and a large one with glowing red eyes behind him. No, not Sam - the other one.

Tiki in Polynesian stories is a lot like Adam in Genesis. I had no idea he was a specific person until I went looking after this episode. My only tiki experiences have been a weird 1970s two-foot long spoon and fork carved with tikis that we inherited from my grandparents-in-law and the leaky tikis at Disney World. Then there's this face. Oh, how could I resist?

Sorry. Anyhow, I looked for flowers but only really found them in one spot. SPN often puts innocent victims in pink. It's one of the reasons why it was hard to tell how Emma was going to turn out in the last episode where she wore pink almost all the way through. When the boys are first checking out witnesses, they see the first victim's daughter on the stairs. Just looking at her clothes and the ones worn by her nanny made me wonder if they were victims or perpetrators. Turns out it was a red (pink) herring.

The pictures on the wall were just kind of cool.

The only place I found flowers was in the garden near the little girl as she was drawing on the sidewalk. If there is a threat here, Sam seems to be it. A bit of a reminder that there are a lot of things potentially scarier than clowns out there.

Tyler probably knows that too. This is a cool shot with all the lines. Tyler's mom looks really familiar but I haven't seen her in anything listed in her bio.

A lot of the episode was just for fun. Whatever you felt about the whole bad cop routine, I thought Jared did a good job playing badcop!Sam differently than Robo!Sam. Judging from the third item on the list of no's, Sam doesn't need to worry about working for Plucky's.

They probably won't be hiring Dean either....

This looked like it must have hurt. At least Lion Guy has a lot of padding.

Plucky's keeps spare unicorns in the basement along with the hoodoo.  Tennessee Williams wrote a play called The Glass Menagerie where a glass unicorn has an important part in the plot.  I don't know if the connection is deliberate but it's cool anyhow.

At the end, I was left wishing these guys had a chance to smile more often. They're kinda sweet when they do.

When it comes right down to it, as scared of clowns as he seems to be, Sam did a pretty good job of getting in there and trying to do his job anyway. A famous quote I will now botch says something about courage is being scared to death and doing what needs to be done anyway. Both of these guys have courage by the bucketful and I'm thinking they are going to need it pretty quickly.

However, after this episode, I won't think any less of anyone who runs screaming from this guy.

Screencaps from Home of the Nutty,

Tags: 7.14, cap and recap were sitting on a fence, meta, spn, thoughts
Subscribe